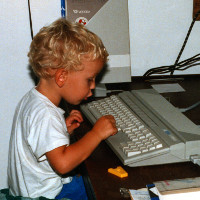 I received my Bachelors (Electrical Engineering) and Masters (Embedded Systems) from Eindhoven University of Technology. In April 2014, I successfully defended my PhD thesis at the same university. During the PhD I gained experience through two internships: with the OpenCL compiler group of ARM in Cambridge (UK), and with the cuFFT team of NVIDIA in Santa Clara (CA). After that, I worked as a GPU consultant at the SURFsara supercomputing center and as a C++ performance engineer for a computer vision and machine learning team at Blippar. Following, I worked at TomTom on deep learning software for autonomous driving in Python for 4.5 years. Currently, I work as deep learning engineer at Plumerai.

My main programming languages are C++11, Python, and CUDA/OpenCL for GPU programming. For the last few years I have worked on machine learning for computer vision applications, mainly in Python and TensorFlow. This includes both the software engineering as well as the machine learning research aspects. From my past jobs and studies, I also have experience with compilers, high-performance computing, computer architecture, and low-level programming.

As a hobby I program in C, Python, C++11, and OpenCL. The largest hobby project is CLBlast, an OpenCL BLAS library. For more hobby projects, see the projects page. Other than that, I like to run, watch & read Sci-Fi, and I've made it a sport to minimize my usage of free Google/Microsoft/Apple/Facebook/... services and products.

Profiles on other pages

08/2012 - 12/2012
ARM Cambridge (United Kingdom)
Research intern
As part of a 4-month HiPEAC sponsored internship, I performed research within the ARM Mali OpenCL compiler team. I created a machine-code level mathematical performance model for the Mali T600-series, one of the first OpenCL capable low-power GPU architectures. Additionally, I worked on a GPU cache model, and was involved in the design of the PENCIL language, part of the CARP EU project.

10/2009 - 12/2014
Kinento (Netherlands)
Founder and owner of Kinento
Kinento is a privately owned e-commerce company. Three PHP extensions to Magento were developed and maintained. From 2015 onwards, they are open-sourced and available for free on GitHub.

11/2010 - 04/2014
Eindhoven University of Technology (Netherlands)
Doctor of Philosophy (PhD)
Under the supervision of prof. Henk Corporaal, I performed research on GPUs. This covered most aspects of GPUs, including micro-architecture, compilers, performance modelling, and programmability issues. This has led to two journal articles, a patent application, and several publications in international conferences and workshops. During my PhD, I interned for 4 months at both ARM and NVIDIA. My PhD thesis is titled 'Improving the Programmability of GPU Architectures' and is available in PDF form.