Still not at the performance level of cuBLAS, so what's next? Are we using the same techniques as cuBLAS? Inspection using the CUDA visual profiler tells us that cuBLAS is running only a single work-group of 256 threads per SM, that each work-group uses 32KB local memory, and that each thread consumes the maximum of 255 registers. Let's try to mimic that configuration.

First of all, if we go for only 256 threads per SM, we'll suffer from the latency of off-chip memory accesses. There is a well-known technique to overcome that: software pre-fetching. In the case of matrix-multiplication, that means that we are going to load the next tile while we are computing the current tile, such that the latency of the loads can be hidden by computations.

To implement this, we'll need twice as much local memory, automatically limiting us to one work-group per SM (and giving us the same 32KB as cuBLAS). Since we cannot have 3D arrays, we'll just flatten one dimension:


Since the kernel code has become quite large, we'll take a look at a shorter pseudo-code version. The code below replaces the previous loop over the tiles. Things to notice:

Since pre-fetching uses twice as much local memory, we end up with only 256 active threads. Although we do pre-fetch, this still harms performance significantly, ending up with ~400 GFLOPS less than the previous kernel. However, we no longer have to care about the 128 registers per thread limit to get 512 threads running, so we have headroom for further optimisations. On to the next kernel! 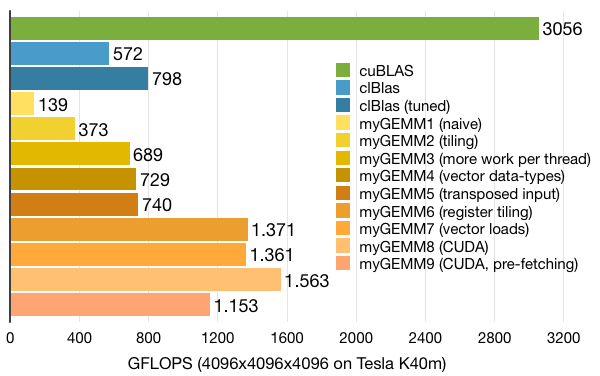